In a previous blog on Getting Started with Modern Data Center Fabrics, we discussed the common modern DC architecture of an IP fabric to provide base connectivity, overlaid with EVPN-VXLAN to provide end-to-end networking. Before rolling out your new fabric, you will design your overlay. In this blog, we discuss the Collapsed Spine/Core architecture.

For those who prefer to “Try first, read later”, head to Juniper vLabs, a (free!) web-based lab environment that you can access any time to try Juniper products and features in a sandbox type environment. Among its many offerings is an IP Fabric with EVPN-VXLAN topology and while this sandbox does not support the collapsed spine architecture, it does include a data center setup pre-built with an edge-routed bridging architecture. Each fabric is built using vQFX virtual switching devices and the sandbox includes HealthBot, Juniper’s network health and diagnostic platform.

Simply register for an account, log in, check out the IP Fabric with EVPN-VXLAN topology details page and you are on your way. You’ll be in a protected environment, so feel free to explore and mess around with the setup. Worried you’ll break it? Don’t be. You can tear down your work and start a new session any time.

What is a Collapsed Spine/Core Architecture?

Unlike the full EVPN-VXLAN architectures we have discussed in recent blogs, including Bridged Overlay, Centrally-routed Bridging (CRB) and Edge-routed Bridging (ERB), the collapsed spine takes a hybrid approach.

In a data center context, a collapsed spine architecture has no leaf layer. The EVPN-VXLAN overlay functionality that normally runs on spine and leaf fabric is collapsed into only the spine devices. In a campus context, this model is called a collapsed core architecture, as it takes the normal three-tier hierarchical network and collapses the core and distribution layers into a single combined layer.

As shown below, with a collapsed spine/core architecture the spine devices run EVPN-VXLAN and perform inter-V(X)LAN routing. They can use EVPN multihoming to provide resiliency for the access layer. The access devices remain in their original role as Layer 2 top-of-rack (ToR) switches. These devices can be standalone or grouped in a Virtual Chassis and run LAG interfaces upstream to the spine devices as well as downstream to provide resiliency for the servers. For traffic leaving the data center, the spine switches typically act as a border gateway. 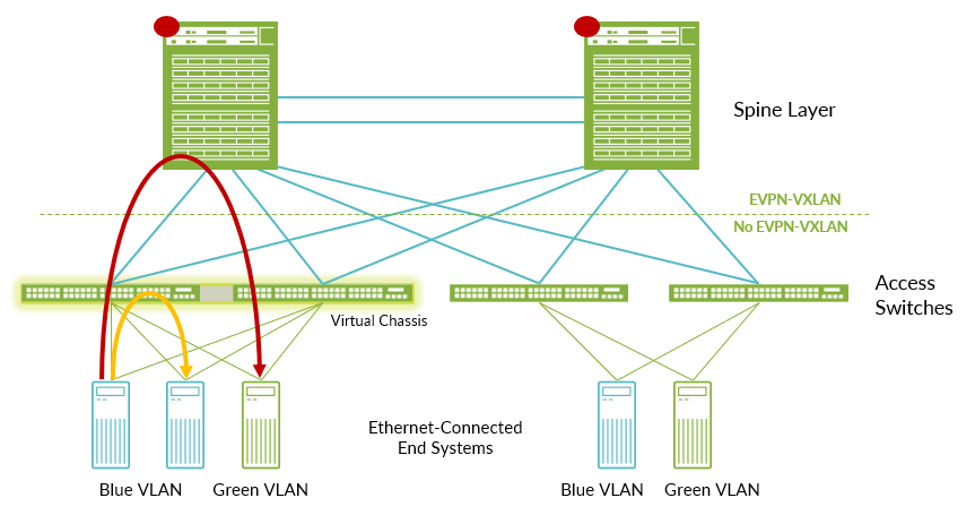 Why a Collapsed Spine/Core Architecture?

A leading reason to use the collapsed spine/core approach is when you want to modernize your network environment, but you want to take a phased or incremental approach. Rather than going all in on EVPN-VXLAN, you can start with just the spine layer. Once things are running smoothly, you can then convert the access devices to a leaf layer and complete the fabric.

Another case for using this approach is when you have older leaf devices that don’t support EVPN-VXLAN. The collapsed spine/core model allows you to gain the value of EVPN-VXLAN at the spine layer, while extending the life of existing legacy ToR devices.

Overall, the collapsed spine/core model is a good option for smaller DCs with mostly north-south traffic.

In this architecture, only the spine devices require EVPN-VXLAN configuration. As described in a previous blog, Getting Started with Modern Data Center Fabrics, these elements include:

You will also want to set up EVPN multihoming on the interfaces towards the access devices.

Since a key aspect of this architecture is leaving the access layer as is, it may well require no additional configuration! The access devices should have the usual set of elements in place, including:

With that, we’ve covered the basics for using a collapsed spine/core overlay architecture. There are plenty of other details to consider, but this will get you started. We’ll discuss other architectures in a future blog. In the meantime…

Try it – Get Hands-on with Juniper vLabs