Why Conversational AI is Key for the Enterprise

Why Conversational AI is Key for the Enterprise
October 2, 2020
by Jisheng Wang

Scholars believe that language in human beings began to develop over 200,000 years ago. We’ve been communicating ever since using words and sentences as the building blocks for all types of interactions, from simple to complex. From an early age, we learn how to navigate and engage with the people around us. We interface with one another using a common tongue. It has become totally natural to ask, explain and elicit context about our world from our conversations with others. Whether spoken or written, we use well-known language patterns to identify, investigate and solve problems, together. So when we build new and complex technologies, it can seem strange that they sometimes force us to learn totally new patterns or languages to interface and engage with them.

Human-machine interaction is a challenging problem. An interface is a bridge between worlds that translates intent to action, yet for too long we’ve been meeting the machines in the middle, rather than being empowered to use the interface we’re most comfortable with: natural language. Rather than raise the bar for interaction with machines and technology, we should democratize access and lower the bar to engage with the growing complexity surrounding us. One way to do this is by implementing better interfaces – ones we already know and are expert in. Truly intelligent technology should adapt to us and become an expert in our natural interfaces and patterns.

In the consumer space, Siri and Alexa understand natural language and allow us to query and engage with a whole host of services and actions, naturally. They can recognize, interpret and understand requests that allow even a small child to learn about and control the world around them. Search engines, using a simple text box, surface results but can also answer direct questions and even infer context based upon previous queries. Powering these seemingly simple interfaces are decades of Artificial Intelligence (AI) research and evolution. Leaning heavily on Natural Language Processing (NLP) and underpinned by Natural Language Understanding (NLU), new interfaces to complexity are finally incorporating the natural patterns we use daily.

Marvis, one such AI engine, is built on the goal of making complex actions simple. It learns and continually trains its own models based upon a variety of sources and feedback which include human interactions (not just network telemetry). Marvis, rather than beginning its own language training, took advantage of an accelerated learning method called Transfer Learning. This graduated Marvis’ NLU to the point where it was trained for only networking specific terms, rather than a whole corpus of modern language. Such a head start meant not needing to spend time in “school”, as a baseline knowledge and immediate understanding was downloaded into Marvis. This was achieved by using an industry-leading NLU engine. It provided a pre-trained language representational model built on a 24 layer, 340 million weight, neural network on par with Google Home and Amazon Alexa. Marvis can now immediately understand general intent, handle flexible input and deal with typos. 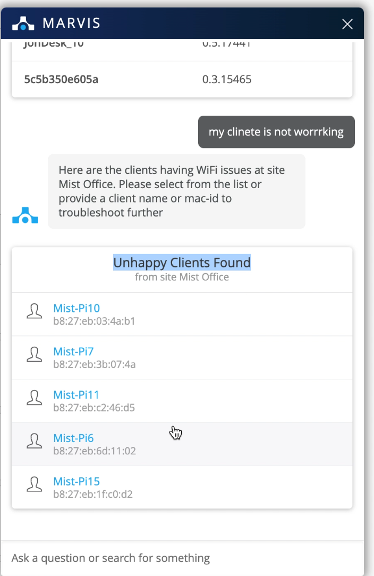 Marvis’ conversational interface provides a user with instant natural language access to a wide range of capabilities, not just search related answers, but troubleshooting and actions. Marvis proactively surfaces problems and confidently suggests solutions including going on to remediate and resolve issues, directly in the interface. 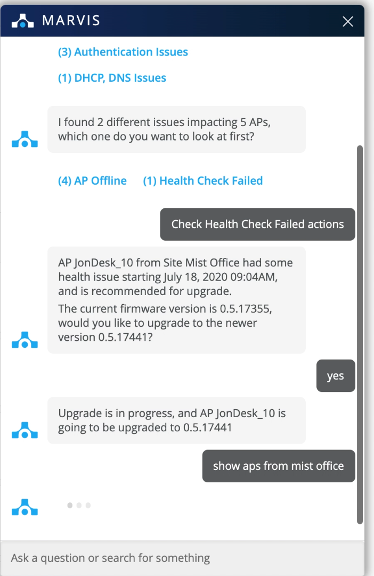 Like any good team member, Marvis also seeks to continually learn and self-improve. This learning happens throughout the platform but also during user conversations in both active and passive modes. Marvis solicits candid feedback but also continually analyzes the sentiment of each question and related user response, which allows for ongoing calibration and training. This leads to continual and compounding improvements in accuracy, understanding and efficacy. 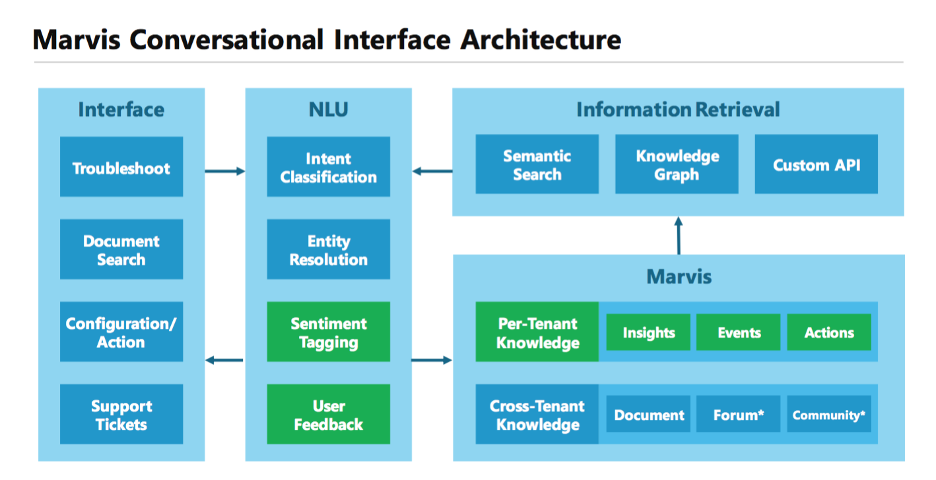 Marvis’ conversational interface architecture is a new overlay providing holistic access to what was once only accessible from discrete pages of a user interface. Marvis now integrates everything into a single intelligent and friendly chat interface, one that leverages all the functionality, frameworks and building blocks underneath.

By democratizing the ability to interact with complicated or complex systems, we enable users and observers to go further, faster. However, if a user is skeptical of a provided answer or lacking trust in an interface, an AI engine should also be able to present clear evidence and easily digested data to back up its conclusions. This is where Marvis also shines in terms of “explainability”. Marvis demonstrates the most relevant snippets of information in the chat window and also actively offers navigation to the appropriate part of the GUI (Graphical User Interface) for independent deeper dives. Trust is built on transparency. 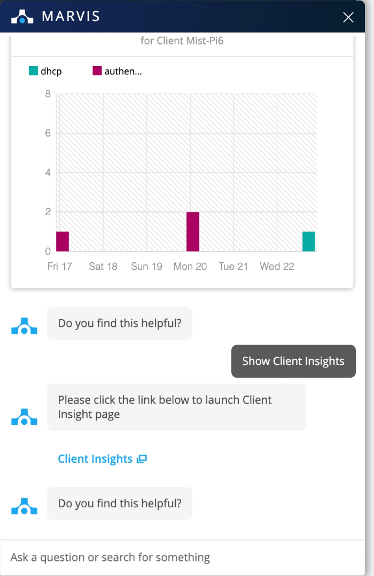 Marvis can now be thought of and interacted with as a virtual team member, one there to help, support and provide guidance and remediation when needed. Everyone from helpdesk to network specialists will benefit from engaging with Marvis as an integral part of their new and distributed hybrid team. Marvis is perhaps the first omnipresent support team member, on-call 24/7, observing and assuring the best user experience possible, 365 days a year.

Additional blogs in this series

Anomaly Detection in Networks and a Few Tools in the Box

What AI Means in Networking