The malware is being advertised on black market forums as “Masad Clipper and Stealer.” It steals browser data, which might contain usernames, passwords and credit card information. Masad Stealer also automatically replaces cryptocurrency wallets from the clipboard with its own.

Masad Stealer sends all of the information it collects – and receive commands from – a Telegram bot controlled by the threat actor deploying that instance of Masad. Because Masad is being sold as off-the-shelf malware, it will be deployed by multiple threat actors who may or may not be the original malware writers.
What it does
This malware is written using Autoit scripts and then compiled into a Windows executable. Most samples we have seen are about 1.5 MiB in size, however, Masad Stealer can be found in larger executables as it is sometimes bundled into other software.

When Masad Stealer is executed, it drops itself in %APPDATA%\folder_name}\{file_name}, where folder_name and file_name are defined in the binary. Examples include amd64_usbhub3.inf.resources and ws2_32.exe, respectively. As a persistence mechanism, mMasad Stealer creates a scheduled task that will start itself every one minute.

Stealing routine
After installing itself, Masad Stealer starts by collecting sensitive information from the system, such as:

It zips this information into a file using 7zip utility, which is bundled into the malware binary. 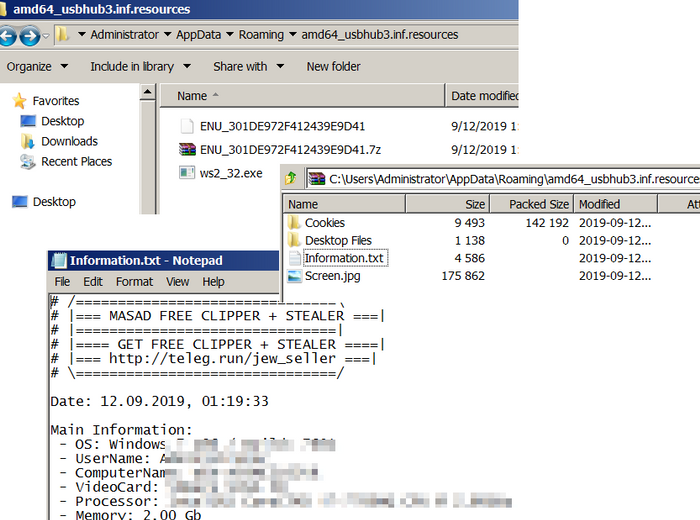 The above screenshot is a view of what Masad Stealer tries to exfiltrate from a sandbox. But the data that it can exfiltrate can expand to the following list: 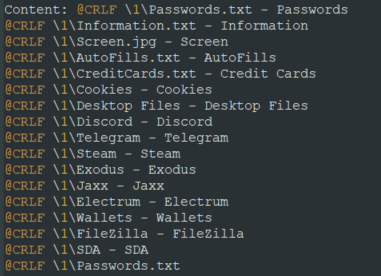 A list of information that this malware can steal

Using a hardcoded bot token, which is basically a way to communicate with the Command and Control bot, Masad Stealer sends this zip file using the sendDocument API.

In order to communicate with the Command and Control bot, Masad Stealer first sends a getMe message using the bot token to be able to confirm that the bot is still active. Upon receiving this request, the bot replies with the user object that contains the username of the bot. This username object is useful for identifying possible threat actors related to this malware. This is an important consideration because of the off-the-shelf nature of this malware – multiple parties will be operating Masad Stealer instances for different purposes. 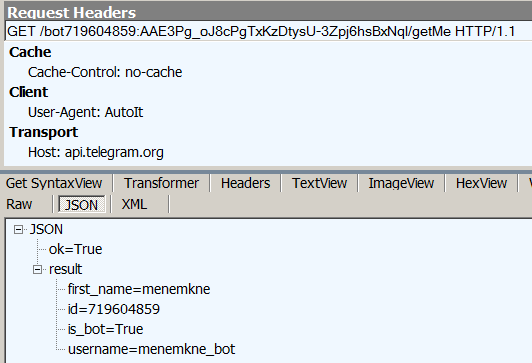 Initial request by the malware to the telegram bot to make sure it is active.

Where the bot’s token is “719604859:AAE3Pg_oJ8cPgTxKzDtysU-3Zpj6hsBxNqI”.
Clipping Routine
This malware includes a function that replaces wallets on the clipboard, as soon as it matches a particular configuration. Below are the regular expressions and supported wallets that it matches against the clipboard data: 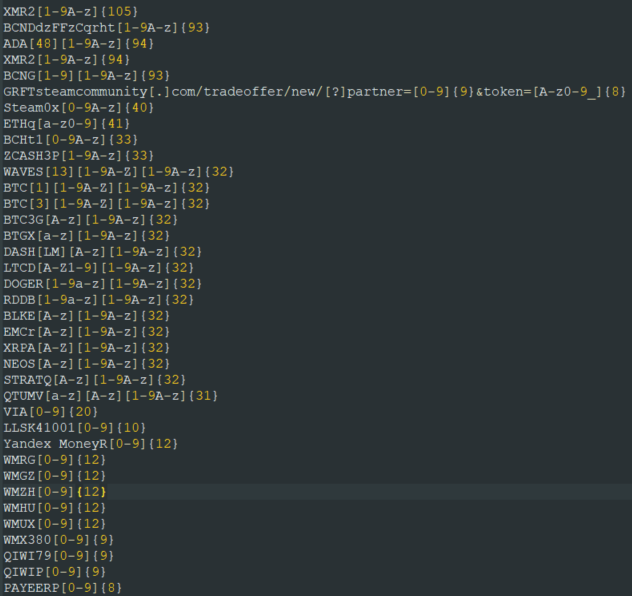 Below is a list of coins/wallet it tries to clip:

Below is a snapshot of the bitcoin wallet transaction, as of this writing. This wallet has already received around $9,000 USD equivalent of bitcoins (as of Sept 15, 2019), which may or may not come from the activity of this malware.

A sample fraudulent bitcoin wallet found on one of the sample

Based on our telemetry, Masad Stealer’s main distribution vectors are masquerading as a legitimate tool or bundling themselves into third party tools. Threat actors achieve end user downloads by advertising in forums, on third party download sites or on file sharing sites. Below are the currently known list of software that Masad Stealer has been seen mimicking:

Masad stealer downloading a miner via HTTPS and with modified header

The figure above is a response from the request to https://masadsasad[.]moy.su/base.txt. This response contains an executable file with modified header. In addition to connecting via TLS, the modified header is an added trick by the malware to hide itself.

TLS streams are more difficult to inspect, helping to hide them from network-based security defenses. The modified header helps to hide the fact that the payload being downloaded is an executable from endpoint security products.

This malware is being advertised in several hack forums as Masad Stealer. It starts with a free version and ladders up to versions asking up to $85, with each tier of the malware offering different features. 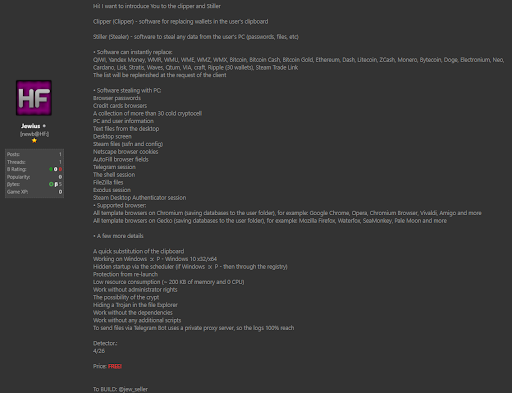 There is at least one dedicated website (masadproject[.]life) in existence to promote the sale of Masad Stealer. The developers have also created a Telegram group for their potential clients, and presumably to offer tech support.  At time of writing, this group has more than 300 members. 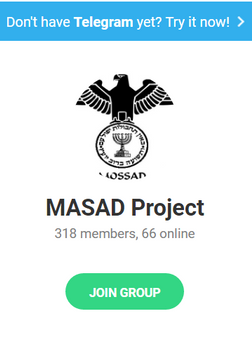 Screenshot of a telegram group where one threat actor is operating

Of the more than 1,000 samples we identified to be variants of this malware, there where 338 unique Telegram Command and Control bot IDs. From this data, we can estimate the number of threat actors – or at least the number of different campaigns being run using the Masad Stealer malware – and the size of their operations. We used the getMe API, along with the bot token, to identify the usernames. Among the top bot IDs are as follows:

Previous versions of this malware (or possibly a direct ancestor) are called “Qulab Stealer”.
How does Juniper Networks protect you against this?
Juniper Advanced Threat Protection products JATP and Sky ATP use machine learning to be able to accurately identify malware. The following images show the Sky ATP detecting multiple variations of this malware. 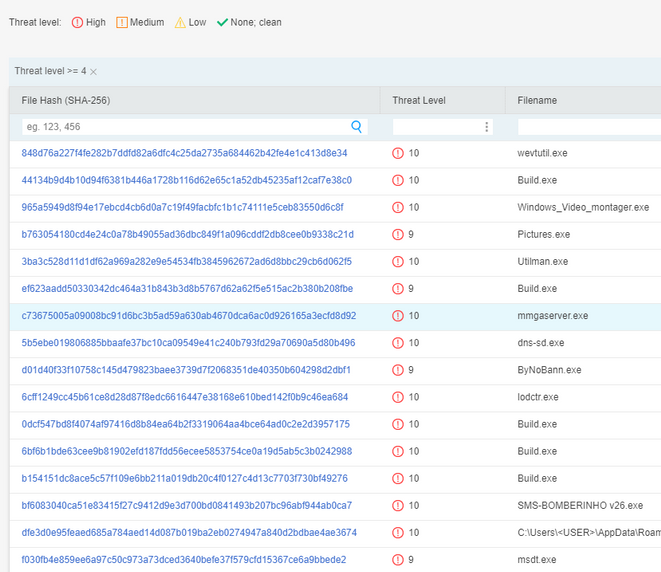 The use of machine learning is critical to defending against this malware because of the number of rapid iterations it underwent throughout its development. Machine learning allows Juniper Connected Security to identify Masad Stealer variants as they emerge, helping to keep customers protected even before new strains have been identified.
Conclusion
Juniper Threat Labs believes that Masad Stealer represents an active and ongoing threat.  Command and Control bots are still alive and responding as of this writing, and the malware appears to still be available for purchase on the black market.

Juniper Sky ATP, in conjunction with our SRX firewall will block any client infected with Masad Stealer from reaching out to the Command and Control bot master. It will also block the download of the Masad Stealer malware files in the first place, offering both remediation and prevention capabilities. 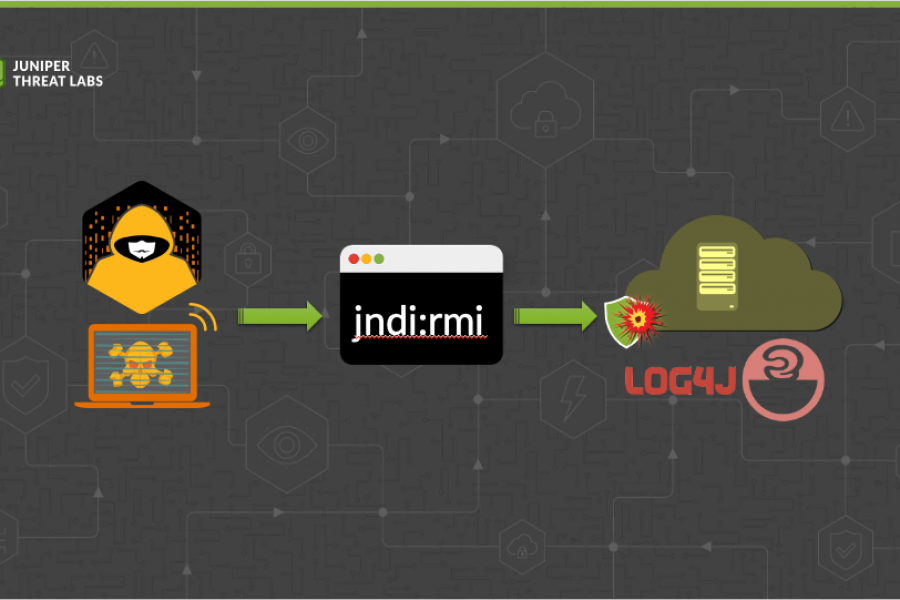 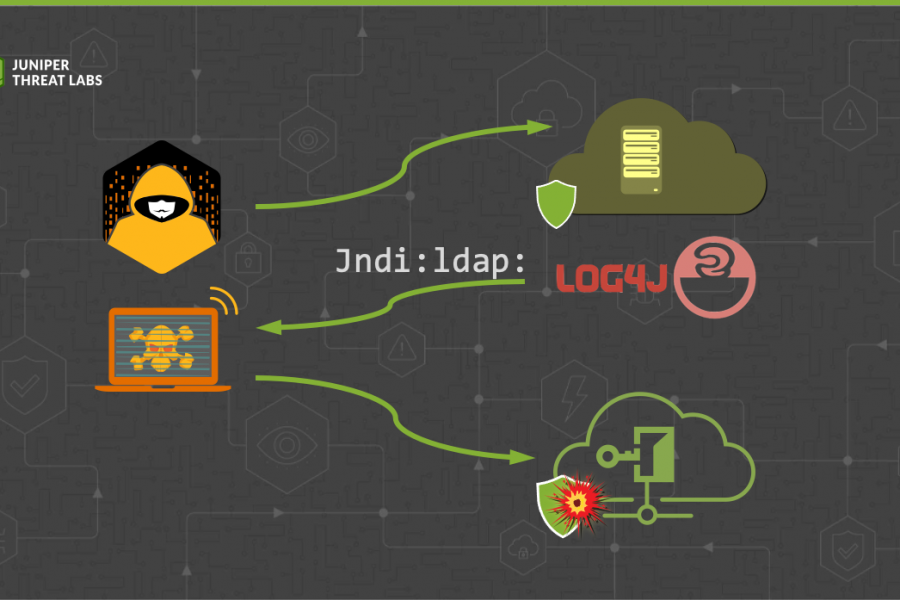