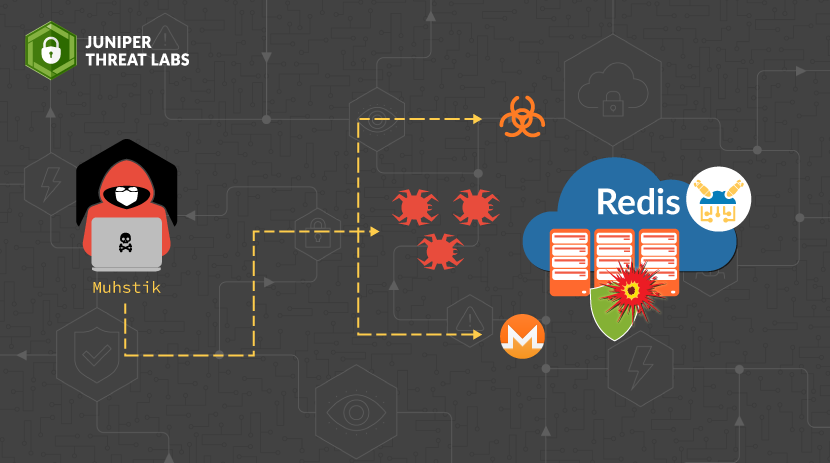 Juniper Threat Labs has uncovered an attack that targets Redis Servers using a recently disclosed vulnerability, namely CVE-2022-0543. This vulnerability exists in some Redis Debian packages. The attack started on March 11, 2022 from the same threat actor we’ve seen targeting confluence servers back in September 2021 and the same group targeting Log4j back in December. The payload used is a variant of Muhstik bot that can be used to launch DDOS attacks

“Redis is a very widely used service for caching, but it’s also used as a message broker. Clients talk to a Redis server over a socket, send commands, and the server changes its state (i.e. its in-memory structures), in response to such commands. Redis embeds the Lua programming language as its scripting engine, which is made available through the eval command. The Lua engine is expected to be sandboxed, i.e., clients can interact with the Redis APIs from Lua, but should not be able to execute arbitrary code on the machine where Redis is running.“

This vulnerability existed because the Lua library in some Debian/Ubuntu packages is provided as a dynamic library (Ubuntu Bionic and Trusty are not affected). When the Lua interpreter initializes, the “package” variable is automatically populated, and that in turn permitted access to arbitrary Lua functionality.

For instance, we can use “package.loadlib”  to load the modules from “liblua” library, then use this module to execute commands.

The following is a proof of concept on how to exploit this vulnerability.

To demonstrate this attack, we instantiated a vulnerable Redis server and launched the above Lua scripts using the “eval” command. As you can observe from the screenshot below, we are able to achieve code execution by dumping the contents of /etc/passwd.

On March 11, Juniper Threat Labs observed attacks launching this exploit from our telemetry. The attack attempts to download “russia.sh” using wget or curl from “106[.]246.224.219”. It saves it as “/tmp/russ” and executes it.

This script (russia.sh) will further download and execute linux binaries from 160[.]16.58.163. These binaries are identified to be variants of Muhstik bot. This bot connects to an IRC server to receive commands which include the following:

We mapped the originating IP of these attacks to figure out if these are related to some groups we are tracking. We found that the following IPs was used in the past to launch attacks:

For instance, the IP 191.232.38.25 was used in September 2021 to launch attacks on Confluence Servers exploiting CVE-2021-26084. We have documented that attack here. It’s worth noting that the group is still using the same Muhstik bot. The same IP was again used in December to launch attacks on Apache Log4j.

We advise those who may be vulnerable to patch their Redis service. Debian and Ubuntu have also released security advisories regarding this matter. Links are below: