What is a Fabric, Anyway?

The spine-and-leaf is a special kind of network, called a fabric, with some interesting mathematical properties. One of the most interesting, from a design perspective, is that fabrics are regular, which means they are built out of what some may call “micro-modules”— clearly repeatable sections of the network topology. These repeating sections of the network topology are not directly related to traditional modules built around creating failure and security domains, but they still enable some interesting properties related to the design and management of a data center network.

Many five-stage fabric designs easily lend themselves to breaking the network up into fabs and pods, as shown in the illustration below. Any fab or pod can be replaced without impacting the overall fabric design much like an access layer module in a traditional three-layer hierarchical design. 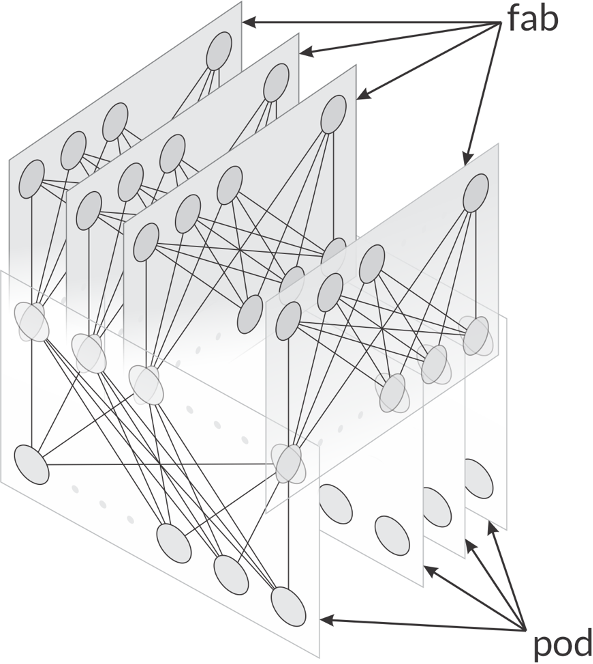 The repeatability of these modules enables automation, just as any other modular network design does. New pods can be added to the fabric and measured while the load is slowly moved onto them to ensure they are operating correctly—all while the fabric is in production. This is called a canary and allows the operator to add or replace network elements at the pod or fab level while controlling risk.

Because pods and fabs can be replaced in this way, they can also be managed in generations, or a repeatable set of hardware, software, configurations and tools. By controlling the number of generations within the fabric, the operator can directly control one of the many elements of network complexity—the variability of configurations.

The spine-and-leaf is also a universal topology, which means it can optimally support just about every kind of traffic flow on a single physical topology. This enables several types of applications, including applications with extremely hard performance requirements, to run efficiently across a spine-and-leaf fabric.

While the spine-and-leaf is a fascinating kind of network topology, many network engineers are still unaware of (or not fully aware of) the many interesting aspects of this network design, its origin and its properties. Join us for an upcoming masterclass where we will discuss aspects of the spine-and-leaf fabric, including the history of the Clos, the butterfly and Benes and cover some design considerations when building a fabric.