So how can it be that so many people get the data center discussion wrong?

The majority of technological changes in this space are happening because of the cloud. More precisely, it’s multicloud. And as workloads move to the cloud—both private and public—for enterprises to take full advantage of the cloud promise, they have to have end-to-end security and automation. This means that while the data center is central, it’s merely necessary, but not sufficient. The constructs that get deployed in the data center must extend out to the cloud on-ramps that exist closer to the user in either the campus or the branch.

But while this seems like a non-data center point to make, it places an important constraint around data center design: whatever is good enough for the data center must also be available in the other PINs that make up the full end-to-end multicloud experience.

Let’s face it: connectivity is table stakes. Simply connecting pools of resources together and calling it a day is not the best way to start. There was a whole wave of innovation predicated on the notion that the application was central to the entire world. It spawned new architectural proclamations and a whole set of acronyms just to describe it.

But the applications aren’t the center of the IT universe—the data is. And this means that merely connecting application components is only a prerequisite. Security has to be included as a top-tier consideration in any multicloud architecture.

The line between networking and security isn’t even blurring anymore. It’s gone. It’s why every multicloud discussion needs to include security. Without it, the strategy is incomplete.

While the majority of data center discussions still start with the number of ports, they all end with software. In the data center networking space, if the devices are the lock, then the software is the key.

But that key is not just the network operating system. Multicloud only works if security and automation extend across all the PINs in the network, which means there has to be an overarching software layer that facilitates policy management and easily extends visibility and operational domains beyond the boundaries of the data center.

Of course, this places requirements on the data center devices themselves, as they must fit into this enterprise-wide fabric. Streaming telemetry, programmatic interfaces and integration into event-driven automation and DevOps frameworks are not just nice to have—they’re critical.

For enterprises of even moderate size, a single vendor simply cannot be an option. Minimally, it places an unnecessary restriction on the sources of innovation. Perhaps more insidiously, it removes any economic levers that a company might need to ensure the data center remains cost-effective in a time when growth is geometric and budgets are flat.

Understanding that the multicloud data center must 1) integrate with the campus and branch, 2) must include both networking and security, 3) must have multi-domain security and policy constructs and 4) has to all be built on open technology, Juniper Networks is focused on helping ensure that enterprises are multicloud-ready. In the data center, Juniper’s solution includes:

The entire data center portfolio runs Junos software, which means that the streaming telemetry, programmatic interfaces and tooling integrations required to support automated operations are commonly available. Just as important, these automation capabilities are the very same that exist across Juniper’s security portfolio and the other PINs, allowing enterprises to bridge operational practices end-to-end in support of a true multicloud architecture.

Junos software also extends Juniper’s industry-leading EVPN-VXLAN implementation across the entire data center. The multicloud will undoubtedly be multi-vendor, and Juniper’s commitment to industry standards means that being multicloud-ready doesn’t come with unnecessary constraints. In fact, EVPN simplifies insertion, as it guarantees interoperability with competitor switches so that evolution doesn’t have to mean throwing away existing assets. 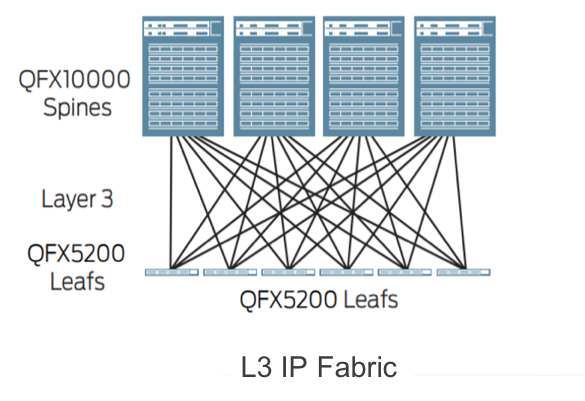 Multicloud isn’t a one-step proposition for anyone. Enterprises don’t have the budget or resources to make chasm-crossing changes in one effort. The key is intercepting natural refresh or expansion projects and then using the normal course of business to become multicloud-ready.