Network automation has come a long way since its inception. Over the years, network automation has gone through many phases from CLI-centered scrapping and scripting, to programmability through NETCONF and OpenConfig, to platform SDKs, to SDN, to NFV, to DevOps and NRE.

All of these terms and aspects point to network automation today. But like the old “finger pointing at the moon” teachings of Zen, Osho and Bruce Lee instruct, these fingers—the terms and trends—are useful themselves, but not to be focused on so much as to lose sight of what they point towards. The point of network automation is automated networking. Put even more simply, it’s better operations.

To better understand network operations and the practice of automating, Juniper Networks set out to survey all kinds of network operators. We’re pleased to now share the findings from this year’s State of Network Automation Report (SoNAR).

Spoiler Alert! Inside the Report

Juniper’s 2020 SoNAR is the second installment of annual research sponsored by Juniper Networks. With this information, we hope to provide some guidance to the industry, through objective measurement and reporting, to help networking teams successfully automate operations.

Unlike last year, SoNAR is now published in a format lighter on reading and heavier on charts. We also structured the analysis into chapters for each of the three types of network equipment users:

Each chapter explains where these users automate, the tools available for use, vendors, processes for network automation before and during production, business outcomes and network architect commentary, to name a few.

Cloud providers, while a smaller sample of the respondents, are the network automation leaders, better in network operations and reliability and consistently exceed key business goals.

This is hardly surprising given terms like SRE and network reliability engineering NRE came out of cloud providers and cloud-native IT shops first. Moreover, cloud providers have a strong network domain and, indeed, a strong IT domain focus on data centers. SoNAR 2020 found they use a broader set of tools to automate and orient around application and user experience metrics like latency and throughput as the most important service reliability metrics. As Paul Arsenault, Blackberry network architect, explains in this network automation case study, “Before you can go faster, you must first ensure network reliability.”

We’ll cover more on cloud and communication service providers in additional blogs. For now, let’s look at the enterprise segment.

Surveying globally this year and with a large group of respondents, we found that 29% of enterprise respondents considered their teams to not yet automate their networks. Put another way, 71% do automate, but more optimistically, 88% of them said they were more than a year into a network automation journey.

Like last year, we found that the enterprise data center was by far the most automated domain.

A newly added survey question pertained to the network vendor. Among enterprises that use network automation, they primarily use four leading vendors: 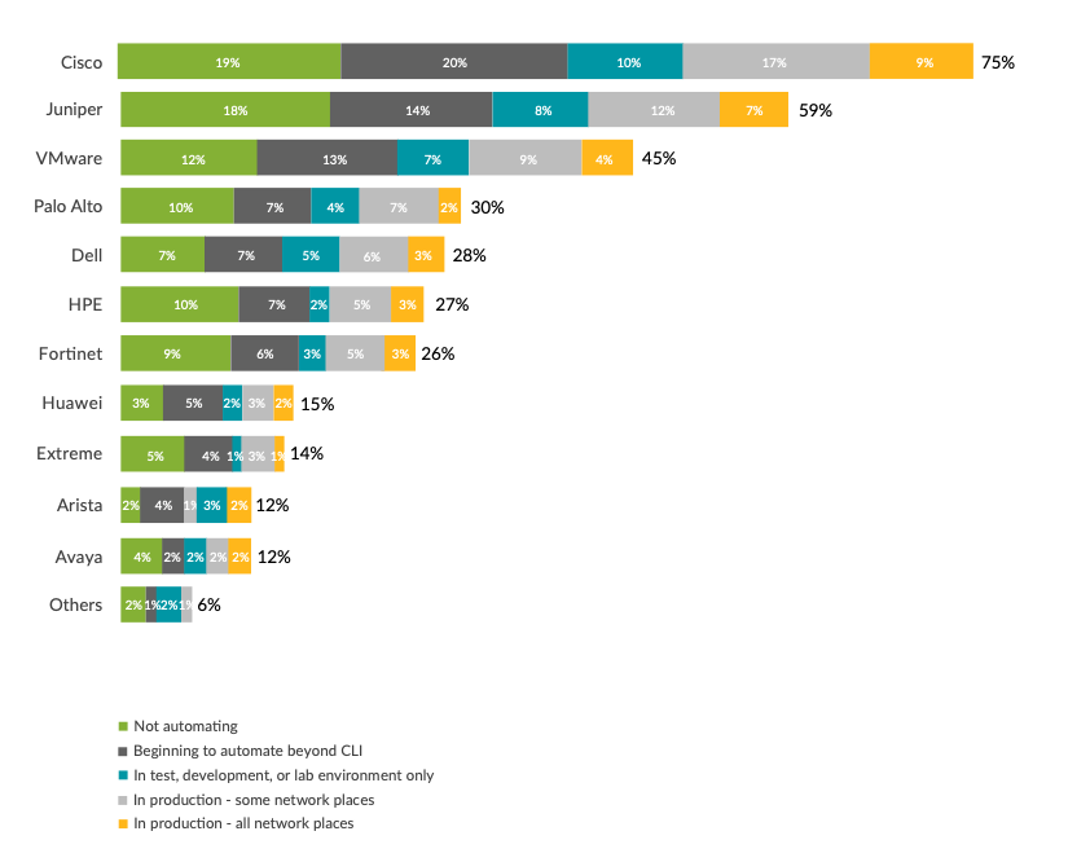 It’s encouraging to see Juniper so prominent here and taking the top spot for automating CSPs too.

There’s plenty more to see in the report. After the findings are illustrated per user segment, the last chapter presents the roadmap to achieving greater network automation.

As said by SoNAR author, network architect and Network Operator Group (NOG) leader Donal Duibhir, “Automation has a long historical arc and its trajectory will continue to stretch far into the future.” While many competitors focus on and benefit from maintaining the status quo, at Juniper we see the need to support the industry through this transformative phase. That’s why we invest in initiatives like NRE Labs, an open source, free in-browser platform and community to support automation education.

With the goal to not only make better network products, but to make networking better—a statement about operations—it’s encouraging to see that the terms and trends that most inspired respondents changed this year. In 2019, respondents drew top inspiration to improve from “DevOps,” but this year “Network Reliability Engineering (NRE/SRE)” took the top spot.